Masonic historians still seek answers to the origin of the Scottish Rite. The first reference to the Rite appears in old French records where the word “Ecossais” (meaning Scottish) is found. During the 17th century, when the British Isles were torn by strife, many Scots fled to France and resumed their Masonic interests there. This influence may have contributed to the use of the word “Scottish.” Records from the 18th century show activity of the Rite in Bordeaux, France. From there it spread to the West Indies and then to the colonies. Antecedents of Scottish Rite existed in Albany, New York as early as 1767. As the growth continued and to bring order out of chaos, a Supreme Council was established at Charleston, South Carolina in 1801, to control the activity of the Scottish Rite. This later became known as the Supreme Council for the Southern Jurisdiction of the United States. A Supreme Council for the Northern Jurisdiction of the United States was organized in 1813. The Northern Jurisdiction headquarters is in Lexington, Massachusetts and coordinates the activities of Scottish Rite within 15 Northeastern, Middle Atlantic and Midwestern states. The Southern Jurisdiction headquarters is located at Washington, D.C., and covers the remaining 35 states. The 15 states in the Northern Masonic Jurisdiction are Maine, New Hampshire, Vermont, Massachusetts, Rhode Island, Connecticut, New York, New Jersey, Pennsylvania, Delaware, Ohio, Michigan, Indiana, Illinois and Wisconsin. Each state has a Deputy responsible for Scottish Rite activity within that state. Today, the Northern Jurisdiction has official and friendly relations with more than 50 Supreme Councils throughout the world. The CEO for each Supreme Council is referred to as the Sovereign Grand Commander.

The Scottish Rite in Buffalo, NY

In 1867, a time when there was no Scottish Rite presence west of Rochester, ten Buffalo Masons who had received their Scottish Rite Degrees in Syracuse petitioned the Supreme Council for a patent to establish a Lodge of Perfection and a Council, Princes of Jerusalem in Buffalo, which was duly granted. A fire in 1882 cost the Lodge all of its records and its Charter. Some reorganization occurred and they eventually received a duplicate charter. Through the efforts of a Brother Abram Oppenheimer, the Lodge finally began to grow, and a commitment was made to do excellent ritual in full form, a tradition that has been largely kept until the present. By 1892, the Lodge and Council were on such good footing that it was time to add a Chapter of Rose Croix and a Consistory, thus making it a complete Scottish Rite Valley. At the meeting of the Supreme Council, Ill:. Charles W. Cushman, 33°, then Thrice Potent Master of Palmoni Lodge, accompanied by Ill:. David L. Day, 33°, urged the granting of a dispensation for a new Chapter and Consistory in Buffalo. The growth of these two bodies was rapid and they received their Charters on September 21, 1893. The Valley had one member who achieved the highest rank in the Scottish Rite — that of Sovereign Grand Commander. That man was Ill:. George A. Newbury, 33° SGC, who served in that role from 1965-1975. {Local history adapted from a work by Ill:. W. Bruce Renner, 33°} 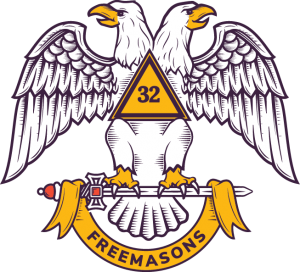